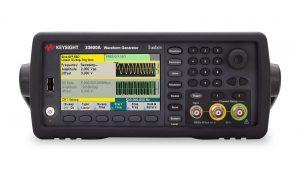 Allen Industries frequently repair Agilent now Keysight electronic products on a daily basis. This frequent repair process allows our engineers and technicians to reverse engineer the Agilent now Keysight electronics for not only the repair on the bench but to help allow expediting future repairs. This repair process has gone on for over two decades and the other advantage is our repair department has procured a very large parts sourcing program among many international parts providers. A function generator is usually a piece of electronic test equipment or software used to generate different types of electrical waveforms over a wide range of frequencies. Some of the most common waveforms produced by the function generator are the sine wave, square wave, triangular wave, and sawtooth shapes. This waveform can be either repetitive or single-shot (which requires an internal or external trigger source). Integrated circuits used to generate waveform may also be described as function generator IC's. In addition to producing sine waves, function generators may typically produce other repetitive waveforms including sawtooth and triangular waveforms, square waves, and pulses. Another feature included on many function generators is the ability to add a DC offset. Although function generators cover both audio and RF frequencies, they are usually not suitable for applications that need low distortion or stable frequency signals. When those traits are required, other signal generators would be more appropriate. Some function generators can be phase-locked to an external signal source (which may be a frequency reference) or another function generator. Function generators are used in the development, test, and repair of electronic equipment. For example, they may be used as a signal source to test amplifiers or to introduce an error signal into a control loop. Function generators are primarily used for working with analog circuits, related pulse generators are primarily used for working with digital circuits. If your company, corporation, or organization is in need of a pulse generator repair, please fill out the Keysight Quick Quote Form to begin the simple repair process.